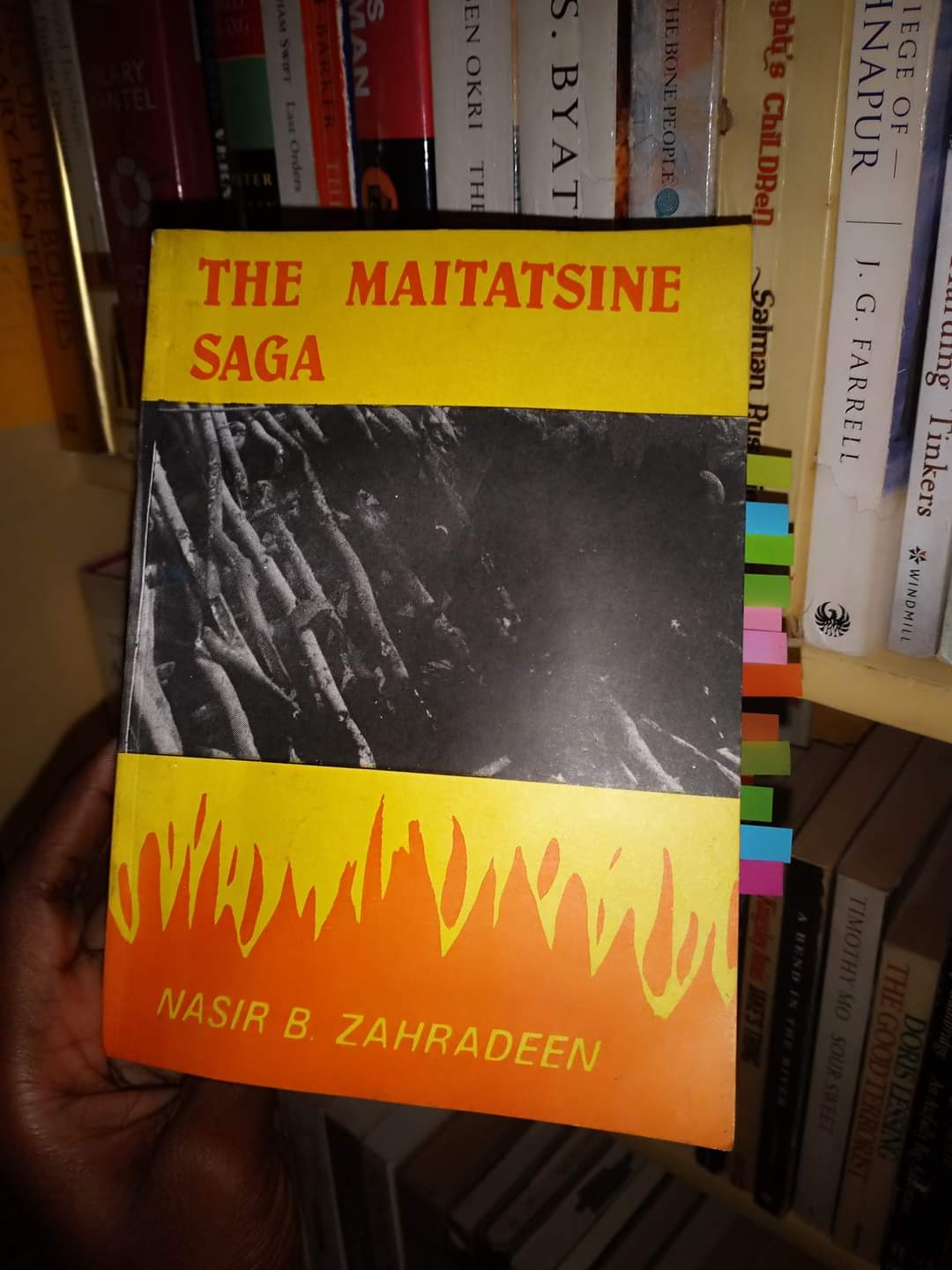 This was the first book I read on extremists. I’ve seen a lot of books on Taliban, ISIS, Boko Haram, and their likes, but this was the first book I read about such cases. I always thought that Boko Haram was a spontaneous mutation, but I came to realize that it has likely sprouted from the Maitatsine enclave. After the ‘Yan Tatsine was crushed in December 1980 in Kano, the Bulunkutum crises started in 1982 in Maiduguri, then came the Ƙala-Ƙato in Kaduna in October 1982 and another religious faction had its short-lived crises in the old Gongola State, then in Yerwa Gana in Gombe State, and ‘Yan Tatsine in Funtua and lastly the Boko Haram in the late 2000s. All those radical extremists had one thing in common, they are religious fanatics with murderous intentions which clashed with true Islamic teachings.

Anyone who grew up in Kano must surely know the history of Maitatsine. When we were young we heard lots of anecdotes about Maitatsine. He was a self-acclaimed prophet. He fought with the government, he has a lot of followers, he and his students used blood as drinking water, and babies were made into sausage (just like in a horror movie); if he saw a newlywed bride he has a telepathic charm of callings her and ordered her to enter straight to his house, and no one would objects or say anything. He was one-eyed, and the other eye had a squint, a situation which further frightened people as it was believed that the beginning of the end of the world would see the emergence of a one-eyed man “Dujal” the Anti-Christ who would fight gallantly against the true faith of Islam. Such and many gory details were clarified and testified by the author in this book. The writer narrates a story of a young lady named Beatrice who came from Port Harcourt and at the railway station, a taxi driver took her straight to Maitatsine’s house. She ended up being a cook and there was the story of an Igbo woman who was also in captivity for quite a long time, they were all liberated in the end.

The book was 117 pages long. The forward was written by Alh Abubakar Rimi the first civilian governor of Kano State and he was in charge of the state when the Maitatsine insurgency started. Rimi in his forward has recommended the book highly. After the prologue, the book has thirteen chapters including the index, each chapter gave a comprehensive account of the Maitatsine’s insurgency. From the beginning of the book, the background of the uprising was given in a detailed outline and Maitatsine’s early life in Kano, followed by the story of his wayward son Kana’an.

Maitatsine claimed to be from Jabbi village in Gongola state because he spoke fluent and unadulterated Fulfulde. This allegation was found to be false. Maitatsine village is in Mufu in Northern Cameroon. He was a Mufu by tribe and they’re mostly pagans. Maitatsine converted to Islam at the age of 16 in 1940 when he left his village for Marwa. The town of Marwa used to belong to the Mufus, but after the Fulani conquest, it fell and so Fulfulde was the common language there. Maitatsine was first employed in Marwa by the man who converted him to Islam, Mohammed Arab, he started as a house boy and later developed to become a cook.

Maitatsine was exceptionally brilliant and soon learned the Quran with remarkable speed. He seemed to have felt that he specialized in Qur’anic translation (tafsir). He, therefore, wanted to be recognized in Marwa, but it was not possible because of his Mufu background, that was what forced him out of Marwa from where he proceeded to Kano.

Muhammad Marwa got the name Maitatsine from the style of his preaching. He uses to shout, “Ɗanƙadiriyya Allah ta sine, Ɗan Tijjaniya Allah ta sine!” meaning: may God curse the followers of Ƙadiriyya and Tijjaniya sect. The author gave a brief history of Islamic sects. I think some sects are no longer in existence or they’re exclusively in the Middle East: Muhasabiyyah, Qaysariyyah, Tayfuriyya, Junaydiyyah, Suhayliyyah, Nuriyyah, Kunaziyyah, and Khafifiyyah, then followed by Qadiriyya and Tijjaniya which are the two most popular sect in Kano as of then.

Most of Maitatsine disciples are youths that came to the city for Quranic education (almajiranci). At that time Kano witnessed a rampant case of missing persons, most of whom were often found at his house. The number of his disciples grew from meager hundreds to thousands.

On 18th December 1980, Kano witnessed a bloody Friday. It was the day that the security forces and the ‘Yan Tatsine had a field day, scores of people had been killed, including a journalist Tunde Amao of Daily Times Newspaper. ‘Yan Awaki was a no-go area, a girl in Shahuci sent on an errand was knocked down by a stray bullet. A nurse from Murtala Muhammad Hospital was also hit by a stray bullet. The police had gone to that battle with barely 150 men against over 3,000 fanatics. There was also the story of a Fulani man who risked his life three times just because of his herds and there was the story of powerful Sharu Ilu at Zage quarters who prepared with charms and lead a group of vigilantes.

The next day – Saturday, a stranded white man was seen at Durumin Iya, this started a rumor of a Jewish connection. The white man was grilled by the superintendent of police. Later on, they found out that he was a tourist from the Netherlands. The Maitatsine insurgency was the bloodiest incident that led to a serious loss of lives and property since the civil war in Nigeria.

At the end of the tunnel, Maitatsine had no option other than to escape the city of Kano. He and his followers set for the journey through Jakara drainage, chanting their usual slogan: shahada! shahada! (martyrdom! martyrdom!) he was finally shot at Janguza. Afterward, they took his corpse to the mortuary, and then it was cremated at the end, this was the end of the Maitatsine’s empire.

The author also made a comparative study with the story of a reverend in the US. named Reverend Jim Jones who had somewhat similar inclinations with Maitatsine. Jones unlike Maitatsine was educated up to a degree level.

However, political differences between the federal government and the state government played a role in dragging the uprising longer than necessary. The Kano State Government was seen by many as leftist and was unpopular with the rightist National Party of Nigeria’s federal government.

After the uprising, the federal government on 5th January 1981, constituted a tribunal under the chairmanship of Hon. Mr. Justice Anthony Nnaemezie Aniagolu, OFR. The tribunal was asked to inquire with maximum speed about the causes of the disturbances in Kano. Late Sheikh Abubakar Gumi, Sheikh Nasiru Kabara, and Professor Shehu Galadanci are among the members of the tribunal. The late Emir of Kano Alh Ado Bayero suggested to the Aniagolu tribunal that permits to preachers should be controlled and that a round table conference between the Ƙadiriyya and Tijjaniya sect should be called.

As I said earlier, the book was just 117 pages long, and I read it in a single sitting. History buffs would surely love it. Northern Nigeria needs to document its history. Although Boko Haram was highly documented, those early cases of the religious uprising had little or no documented history at all, except the usual academic thesis that is only confined within the universities. Such kinds of books needed to be readily available to the public. I doubt if the Kaduna, Funtua, or Gombe cases have any written book about them, notwithstanding, I once saw Yusufu Bala Usman briefly mention the Bulunkutum crises of 1982 in his book Manipulation of Religion in Nigeria.

The author Nasir Zahradeen was born in Kano in 1954. He attended Rumfa College Kano, Ahmadu Bello University Zaria, and the London Academy of Television. He had been a reporter for almost a decade when he distinguished himself in the coverage of the Maitatsine uprising. Nasir Zahradeen worked for Radio Television Kaduna, BBC London, and NTA.