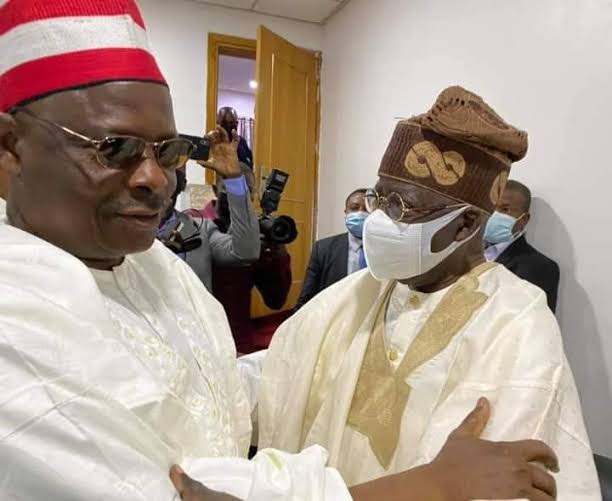 Prominent Kaduna based Islamic cleric, Dr. Ahmad Gumi, has taken a swipe at Presidential Candidate of the ruling All Progressive Congress (APC) Bola Ahmed Tinubu and his counterpart of the NNPP, Senator Rabiu Musa Kwankwaso over their what he terms their domineering leadership style.

Both Tinubu and Kwankwaso came under the cleric’s fire on Monday, but their counterpart of the People Democratic Party (Atiku) received his adulation for standing against political sharia.

” Tinubu and Kwankwaso have signature headgears. When I saw Tinubu’s placeholder VP on BBC news with the ‘infinity’ cap, it tells a lot about the contender himself.

” Imagine a federal cabinet all with redcaps or infinity caps. What fresh ideas can get through leadership that is domineering and imposing?” Gumi queried.

The cleric alleged that with the sycophancy known with Nigerian politicians, the country will remain imprisoned and stagnant in the vision of “one man” if any of the two candidates emerged as president.

“Nigeria is more complex than a man’s personal choices and idiosyncrasies,” he opined.

Gumi tactically avoided attacking the candidature of the Peoples Democratic Party (PDP), Atiku Abubakar. Rather his tone suggested an endorsement for Atiku’s open condemnation of “political Sharia” and Boko Haram.

He opined that Nigeria needs a national leader to the core with a wide chest of accommodation, ” not one that has a sectional or sectarian base aspiration to protect.”

“Nigeria is too big for all the contenders but enough for all if we can elect a winner that can join their hands all to chart a course for a new nation through restructuring and devolution of central power allowing the federating entities to set their own priorities which includes state or regional policing and revenue control,” he added.

” However, whosoever has any authoritative tendencies (check his former team members who left him of what they say about him) or is self-conceited about his importance or knowhow, or is impervious to new ideas and innovations or feels it’s his turn or right to rule others or he cannot sacrifice his aspiration for the national interest – it’s me or none attitude or is notoriously vengeful, all these will only perpetuate us in the quagmire of civil dissensions, economic stagnation, and another circle of wasted years of national lethargy and underdevelopment.”

Lamenting the state of insecurity, the Sheik who is also popular for being a mediator between the Federal Government and bandits in the Northwestern region said Nigerians shouldn’t expect Tinubu for example to openly censure Sunday Igboho or Peter Obi to publicly condemn Kanu as we saw Atiku condemn Boko Haram and the political sharia that we were all at a time enthralled by that cost him a big political backlash in the region then.

According to Gumi,  if Ametukun for has unconstitutionally given itself the power to arrest Fulani herdsmen and curb their free movement in the southwest without corresponding outfits that can check Yorubas who are widespread in the north, “that is a time bomb for ethnic clashes as we saw previously between Yoruba and Hausas in Lagos in the late 90s.”

“If Zamfara will start arming farmers and villagers, being the wild west of Nigeria today, who can control the spiral of anarchy and extrajudicial killings that will turn Nigeria into a river of bloodbath later?” He asserted.

Don’t blame me if APC fails in 2023, Abdullahi Adamu