Thoughts on Morgan Housel’s The Psychology of Money: Timeless lessons on wealth, greed, and happiness 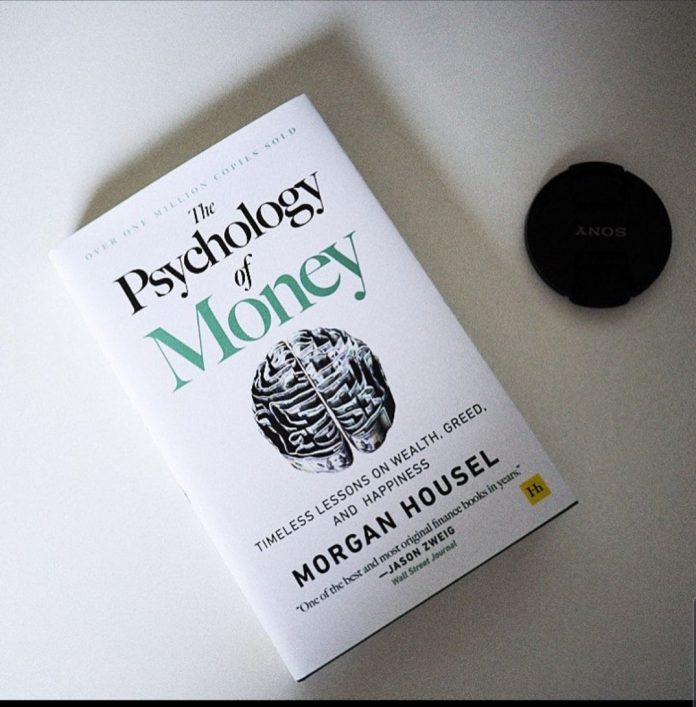 Rich with information, stories of ruins and successes and cautious recommendations on how to grow and sustain wealth, The Psychology of Money is a standout among modern literatures in Finance. Yet, very concise. Little wonder the New York Times Best Selling author of Atomic Habits, James Clear remarked ‘everyone should own a copy’.

The book is an effort to bring to fore the often overlooked roles of emotions, luck and risk in our financial decisions, gains and losses.

Do you know that 40 percent of Americans don’t have a saving of $400 to respond to an emergency?
Yet, the average American gambler stakes $492 a year and the greater number of the people into betting in the country are these same 40 percenters. But you don’t need to wonder why people invest their hard earned monies in absolute uncertainty like betting. “To each their own” asserted the author, “no one’s crazy”. For every penny spent is a reflection of the spender’s social evolution. Thus, the principle of ‘thou shall not judge’ should also be recognized in the world of finance.

Loss of jobs, loss of wealth, inflation and suicide are the things that come to the average mind whenever the great depression of the 1930’s is mentioned. But as a teenager, the former American president John F. Kennedy’s most remarkable memory of The Great Depression was how his father employed extra gardeners that he didn’t need their services just for them to get something to eat. Indeed, the world is not as how we view it. Everyone has his own peculiar experience.

Morgan Housel gives proper respect to roles of luck and risk in man’s pursuit of fortune. He questioned why the same lips that are cheering Mark Zuckerberg for taking the risk of rejecting $1 billion offer from Yahoo! in 2006 to sell Facebook are calling owners of Yahoo! fools for rejecting a big buyout offer from Microsoft. Similar decision from both companies but one turned out to be a correct one and the other a wrong one, though in hindsight. But there’s no single lesson for business owners to learn here. It’s no more than a tale of two dancers which one of them was rewarded with cash and the other punished with a thrashing. We can’t ask everyone to dance and we can’t stop everyone from dancing. Thus, Morgan advocated that the only risk worth taking is that risk with no potentials of bringing one completely down. Having a survival mentality and acting towards it remain the best way out consequences of risk taking and getting closer to windfalls of luck.

Even as the author tries to tell the readers no one’s crazy, he pointed out some crazy things done by the rich in chapter 3. He told the story of a disgraced Indian-American businessman, Rajat Gupta, who was convicted in 2012 for insider trading. Here’s a man that worth over $100 million and was dinning regularly with global billionaires. But his worth was not enough for him. He traded his reputation for a $17 million he made through the fraud. Isn’t this crazy? That’s not the only story.

The chapter also discussed a story of greed by Bernie Madoff, a man who was a worse ponzi schemer than Charles Ponzi himself. According to facts presented to US court, he ran the largest ponzi scheme in history, worth over $64 billion. But before he became a fraudster, Madoff built with his own sweat a firm that was legally making up to $50 million annually. These incomes were never enough for him. Sadly, this is the hall of shame that DCP Abba Kyari is all set to be its latest inductee. Greed pushed Kyari from getting a standing ovation by members of the Nigerian house of representative and presented with national award for outstanding performance in the Nigerian police to getting linked with multimillion dollars scam that put him on the radar of FBI and finally arrested in Nigeria for running a drug cartel. Morgan Housel had this to say towards the end of the chapter:

There are numerous ways of getting wealthy. But ways of keeping wealth are not many. This is where the story of Jesse Livermore comes in. In 1929, as Wall Street was crashing, Boy Plunger or The Wolf of Wall Street as Livermore was nicknamed, cashed in what is worth today over $3 billion and instantly became one of the richest persons in the world. His lavish lifestyle would dwindled the fortune and five years later in 1934 Boy Plunger declared bankruptcy for the third time. He committed suicide in 1940.

Bill Gates once said, “Success is a lousy teacher. It seduces smart people into thinking they can’t lose.”

What’s the lesson here?
Confidence doesn’t keep wealth. What keep people wealthy are habits like humility and frugality. Reliance on previous successes to repeat indefinitely could spell doom as we’ve seen in the life of Jesse Livermore.

Morgan argued that the ultimate goals that matter in chasing wealth is for a man to have control over his time and to attain financial independence, not to acquire luxuries induced by the psychological treadmill of keeping up with the Joneses. But how can we attain financial independence and have control over our own time?
Morgan has just one answer: save, save and save.

Do you know about Ronald Read, the former American janitor and gas station attendant that left behind $8 million in his will when he died in 2014?
Wealth is indeed what we don’t see as the book buttresses. Whereas to be rich on the other hand is to appear in public with expensive things. Morgan tries to convince readers that no one is as impressed with their possessions as their selves. This implies, every wealth brandished in the public leaves the wealth owner more impressed than the veiwers. If so is the case, then why can’t people reflect on this and spend their monies wisely? But to each their own.

People should save even when they’ve no reason to. The future is full of uncertainties and shocks. Since no one can accurately predict the future, there’s no financial shocks absorber like living below one’s income. Readers were made to understand that expectations are slower than facts and saving is the difference between one’s income and his ego.

Morgan asserted that in life nothing is free. The dividends on our investments and the profits in our businesses also have a price. Thus, no one should see losses on his investment as a fine for bad decision, but as a fee which he must pay for the gains he had made or the ones that will come in the future.

Rather than being rational as notoriously advocated by orthodox economics, the author insisted that people should be reasonable with their finances. He gave an example of how fever is efficient at fighting infection in the body by turning on the immune system and making it healthier. Living with a normal fever has been scientifically proved to be medically beneficial, but that’s where the science stops. Fever is seen as a bad thing all over the world because nobody wants to get hurt and fever hurts. It may be rational to want to get fever if anyone has an infection, but it’s not reasonable. Same thing should apply to money. People should put their money where they will be more happy than where they may get more returns at the expense of their hapiness.

The book made it clear that what works for Mr A may not work for Mr B. Everyone has his reason and target for doing anything with money. Emulating others without proper evaluation of the situation is a recipe for regret.

The book ended with a postscript giving a brief history of American consumption pattern that led to the problem of massive inequality the country is facing today. With memories of The Great Depression still fresh, after the second world war, policy makers in the country were deeply concerned about possibility of another depression. They succeeded in averting it through provision of cheap credit and loans with favourable terms in the country. This stimulated the economy to boom and there was great America of the fifties with strong middle class that could afford many luxuries just as the rich. Fifties in America were so good that servicing a house mortgage was cheaper than rental. With the introduction of credit card into the American economy, household debt surged from $29.4 billion in 1945 to $125.7 billion in 1955 and by 1965 American household debt was $331.2 billion. There was no cause for alarm because as the debt was rising tremendously so was the household income.

But things started cracking in the 70’s. The credit induced boom recessed and the economy was hit with inflation and unemployment. Interest rate rose from 2.5% to 8%. Credit terms were no longer favourable. Students loan and other debt servicing issues ensued. But the people couldn’t let go of the beautiful lifestyle that debt funded for them in the recent past. The rich were already effortlessly affording it, but the rest were left with burden of keeping up with the Joneses. The boom resumed in the 80’s but with unequal distribution and the pattern remain the same hitherto. And the emergence of social media where people openly flaunt opulence only adds to the already complicated issue of people trying so hard to live above their incomes.

Morgan’s The Psychology of Money is a trigger of reflection and a reminder for men about the vanities and uncertainties of fortune and life itself that could only be balanced by simplicity and humility. Chukwuemeka Okwo, a member of Naija Book Club on Facebook said, “This book is a gift to humanity” and I concur.